If you’ve been following my blog for long, then you know I love fairy tales. And when I learned about this new resource for fairy tale lovers, I knew I had to share it! It’s great for both readers and writers, so without further ado, here’s how Fairy Tale Central came to be…

Once Upon a Time two girls had a dream. A dream of a fairy tale site, an internet library, if you will, for all the fairy tale lovers of the land to gather and converse. To learn, to read, to fangirl/boy, to bask in the goodness that is fairy tales.

As this dream blossomed, the two girls recruited a third. Because, after all, all good fairy tales come in themes of three.

With the third member in place, the girls got to work. The dream began to take shape, until it was no longer just a dream. But something real.

This newly launched site run by Arielle Bailey, Faith White, and Christine Smith, is your source for all things fairy tales.

Every month a single fairy tale will be featured, and posts will include:

The FTC’s goal is to unlock the magic that is fairy tales and build a community of fellow fairy tale enthusiasts. Arielle, Faith, and Christine are thrilled to share this new fairy tale centric space and connect with all you epic fairy tale fans!

You can CLICK HERE to find the site and join the Fairy Ring! (Don’t worry, you won’t be enchanted or cursed.) And, if you want to connect even more, you can find the FTC on:

(If you’re inclined to share about the FTC in those places too, you may or may not be blessed by a fairy godmother. *smile, smile*)

Do tell a friend, or a dragon, or the fairy living in the hollow tree behind your house. All humans and mythological creatures alike are welcome!

And here is the final installment in my fairy tale for Fairy Tale Day. If you missed the first two parts, you can find them here: Part 1 and Part 2.

The next morning, Maria reached into the SATCHEL she had packed and pulled out the lovely new dress the medicine woman had given her. A deep purple with golden roses embroidered across the dress, it was finer than any anything Maria had ever owned.

“We can’t have our princess looking like a peasant,” the old woman had said. 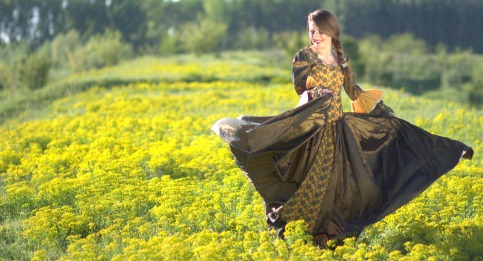 After she was dressed, Maria went out and found the medicine woman. Today they were going to find Edward’s real parents. They rode out to the very edge of the castle grounds where a tiny cottage stood up against the wall.

At first, Maria thought there was no way in, for all she could see where great GREEN bushes. But when they got a little closer, she could see a simple wooden DOOR. Once they reached the door, the medicine woman dismounted.

“Wait here,” she told Maria. She went and knocked on the door. It opened just a crack, and then the medicine woman disappeared behind it.

After what seemed like forever, the medicine woman came out. She smiled and nodded at Maria before climbing onto her horse.

As they headed back to the castle, Maria admired the beautiful LANDSCAPE, all green and bright, with the castle rising up from it like a shimmering jewel. She couldn’t believe she was the true heir to it all.

That night the king held a grand party. All the nobles of the land were there. The villagers gathered their instruments and entered the ballroom to play. They had only finished one song when Will stepped forward.

“And now we present to you the true heir, the Princess Maria!” Gasps and whispers filled the ballroom.

The medicine woman came forward and told what the king had done all those years ago. When she had finished, a CLOAKED FIGURE stepped out of the SHADOWS and pushed through the crowd. He stopped before the king.

The king tried to speak, but his throat closed up and he could only nod. The figure threw back his hood and everyone knew why the king couldn’t speak. The cloaked man was the great wizard Griffin. No one dared question him.

Griffin reached out his HAND to Maria. “Come, Princess. It is time to reclaim your throne.” Cheers filled the ballroom, and the party resumed.

The next day the king sent out a royal proclamation stating that Maria was his true heir and would be treated as such. The punishment for rising up against Princess Maria would be DEATH. Edward was reunited with his real parents, and the king was reprimanded for his lies. A council was formed to keep him in line. And Princess Maria had a life she’d never dreamed possible. Eventually she married Will, and they lived happily ever after.

With National Fairy Tale Day coming up tomorrow (February 26th), I felt it appropriate to share one of the other reading challenges I’m doing this year to help me get through the #unreadshelfchallenge2018.

I’m going to focus on completing a BINGO for the next month or so, but am aiming to complete the whole board by the end of the year. I have already read Spindle by Shonna Slayton (and loved it 🙂 ), but that’s the only square I’ve filled in so far.

The Fairytale Forum facebook group (ran by Ashlee Willis and Shonna Slayton) is hosting this challenge. If you love fairytales, you should definitely check this group out.

And tomorrow, I will be posting an original fairy tale to my blog. Be sure to check it out! 🙂

How will you be celebrating National Fairy Tale Day? Let me know in the comments.