Top Ten Tuesday is hosted by That Artsy Girl. To find out more about the top ten theme, or to join in the fun go here.

I love to read but I also love a good TV show or movie series. And this week’s top ten theme is binge-worthy shows. It was hard to decide exactly what I wanted to include on this list, but I narrowed it down to the ones I think are best for bingeing. Also, I have to warn you my tastes are wide! I like comedies, dramas, mysteries, and some supernatural stuff. 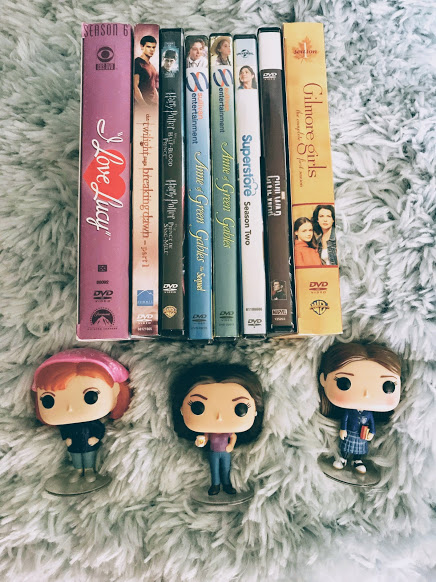 1. Pretty Little Liars – I had to include this one since it’s based on a book series. I love this show because it’s full of mystery and drama. It’s no longer airing on TV, but is available on Netflix or DVD.

2. Gilmore Girls – Any reader can appreciate Rory’s bookish references and nature. This is such a watchable show, no matter how many times you’ve seen the episodes you can always watch them again. And hopefully Netflix will make more revival shows!

3. I Love Lucy – Okay, I know I’m going way back with this one, but I love this show. It doesn’t matter how many times I’ve seen certain episodes, they still make me laugh! This is classic television at its best.

4. Superstore – This is a sitcom that airs on Thursday nights on NBC, and it’s hilarious. I love it! And America Ferrera is in it, so there’s that. I’m pschyed for the new season. 🙂

5. The Originals – This is a vampire series that airs on the CW. However, I mainly watch it on Netflix, so I’m not sure what night it’s on. Lots of drama and historical flashbacks. It’s a spinoff of Vampire Diaries (which I also enjoy), but I like this one more.

6. Hawaii Five-0 – This is the revival show that currently airs on CBS. Again I mainly Netflix this, so I’m not sure what night it airs.  I like the crime-solving of course, but I also love the beautiful tropical setting. (I enjoy CSI: Miami for the same reason. It’s my favorite CSI.)

A side note here too – I like a  lot of crime-solving shows that didn’t make the list but am giving honorable mention – The Mentalist, Elementary, NCIS (it was better before all the actors started leaving the show), and all the Law and Order shows.

7. The Harry Potter movies – I couldn’t leave these movies out. The books are great but so are the movies.

8. The Marvel Avenger movies (including each Avenger’s own movies like Thor and Iron Man) – I’ve been watching these lately, in chronological order, and it’s kind of cool to see how everything fits in.

9. The Twilight movies – I know some people don’t like these, but I enjoyed the books and the movies. I think you either like them or hate them.

10. Anne of Green Gables and Anne of Avonlea – Again movies based on books. I’ve watched these movies a million times. I’ve also watched the Netflix series, Anne with an E, and it was interesting. I’ll probably keep watching it, but it’s hard for anybody to match Megan Follows in embodying Anne.

What about you? What tv shows and movies fo you love to binge? What shows are you excited to see this season?